“The Role of Writers’ Organisations in Society” 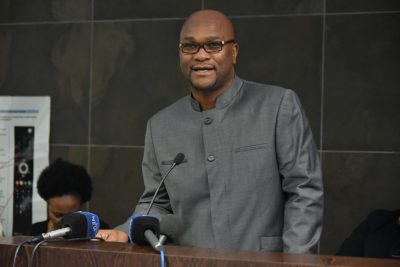 Current Positions Mr Nkosinathi Emmanuel “Nathi” Mthethwa is the Minister of Arts and Culture of the Republic of South Africa from the 26 May 2014.He is also a member of the National Executive Committee (NEC) of the Afri-can National Congress (ANC); member of the ANC National Working Committee (NWC) and an active member of King Dingiswayo branch of the ANC in KZN.He was elected as the first Branch Secretary of ANC in Klaarwater in KZN since 1990 and has been a member of Parliament from 2002.

Career/Positions/Memberships/Other Activities He has been a member of the Klaarwater Youth Organisation from the age of 15 in KZN between 1982 and 1983; and as a Chairperson of the Klaarwater Youth Organisation from 1987 to 1989.He has also served as a Shopsteward of Food and Allied Workers Union (FAWU) where he was recruited into the underground work of the ANC as part of Operation Vula between 1988 and 1989. He was arrested during Apartheid Regime’s state of emergency in 1989; and later he was elected as Secretary of the South African Youth Congress (SAYCO) in Southern Natal and as a Chairperson of the Southern Natal Unemployed Workers Union, an initiative of Congress of South African Trade Unions (COSATU) between 1989 and 1990 respectively.He became Regional Secretary of the Southern Natal African National Congress Youth League (ANCYL) from 1990 to 1992; and he was elected to the NEC of the ANCYL and served in its NWC as Secretary for organization from 1994 to 2001. Later in that year he was deployed into the ANC National Organising team during the period 2001 to 2002.As member of Parliament Mr Mthethwa had served as a Chairperson for Minerals and Energy Portfolio Committee from 2004 to 2008; and as Chief Whip of the ANC in 2008. He also served on the Board of Directors of 2010 FIFA World Cup Local Organisation Committee.Prior to his appointment as Minister of Police; Mr Mthethwa was the Minister of Safety and Security of the Re-public of South Africa from 25 September 2008 to 10 May 2009. Mr Mthethwa was the Minister of Police of the Republic of South Africa since 11 May 2009 till 25 May 2014.

Research/Presentations/Awards/Decorations/Bursaries and Publications Mr Mthethwa has Contributed articles to Mayibuye and Umrabulo Publications.

“The Role, State and Significance of Writers’ Organisations in 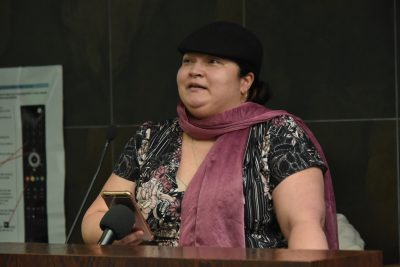 Lisa Combrinck was born in Cape Town in 1967. She attended the University of Cape Town where she obtained a BA Honours degree in African Studies and an MA degree in Creative Writing. She has worked as an arts and education reporter for South newspaper as assistant editor and coordinator of the Southern African Review of Books and as a lecturer in the English Department of the Mamelodi Campus of Vista University in Pretoria. She is currently a spoke person at the department of Arts and Culture. She is former vice-president of the Congress of South African Writers, an executive member and Chair or the Literature Panel.of the National Arts Council of South Africa and part of an organising committee spearheading the Against All Odds: African Languages and Literature into the 21st Century Initiative. She co-edited an anthology of new South African and Nigerian poetry together with the Nigerian writer, Aderemi, Raji-Oyelade. Her poems have been widely anthologised in South Africa and some have been published in German translation. Lisa has performed her poetry to international audiences. Her poetry has been described as combining the erotic with the political. 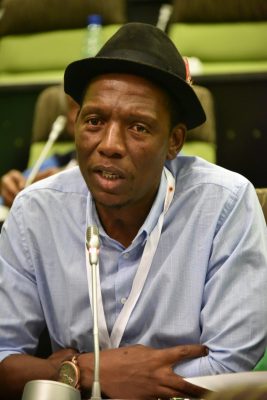 Goodenough Mashego is an editor, artist, publisher, journalist, published author (Journey with me and Taste of My Vomit) and a social commentator based in Bushbuckridge, Mpumalanga. His poetry has appeared in various anthologies such as Botsotso, Timbila, New Coin, Green Dragon, Fidelities and ten others. Mashego is a literary critic and publishes two arts and culture blogs, Kasiekulture and MSHINI WAM. Bantu Letter is his first editorial project. 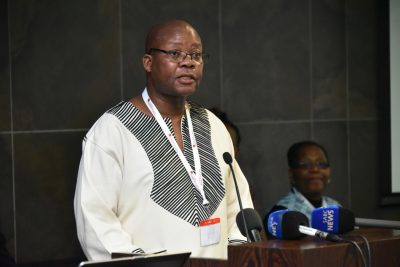 After over 20 years’ experience in the grassroots and non-governmental organisations and activities, Raks Morakabe Seakhoa founded and headed for 15 years the wRite associates, a one-stop public relations, strategies, project and event management agency that delivers highly effective implementable services and products, focused mainly within the arts, culture and heritage sector and beyond. He is now Senior Manager at SAMSA (SA Maritime Safety Authority) working on maritime heritage development strategies.

From 1988 to 1997, he tenured as the Regional Co-ordinator and Secretary General of the Congress of South African Writers (COSAW). Raks helped raise the visibility of South African literature and its writers through literary skills transfer workshops, literary public readings, writer-international exchange programmes, conferences and his involvement in publications and translations of works into various South African languages.

To date (from 2005), he’s been the Project Co-ordinator and Publishing Editor of the South African Literary Awards and the latter’s publication/anthology, Band of Troubadours, respectively, as well as the Africa Century Literary Art & Orature: centenary celebrations conversations.

From 2006 to 2007, he was appointed Chairperson of the Board of Windybrow Theatre by the Minister of Arts & Culture, Dr. Z. Pallo Jordan.

Raks is connected to a large and varied network of well-known and highly regarded personalities who are strategically placed in sectors of business, literary and art organisations, government, entertainment and non-governmental organisations. 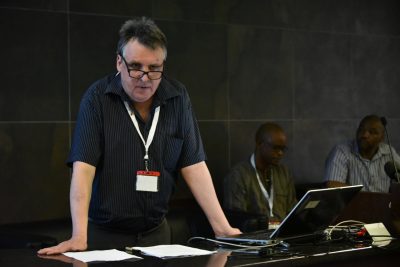 Andrew Martin is a Research Curator at the National English Literary Museum in Grahamstown. Since 1995, he has been compiling a bibliography of black South African creative writing and literary criticism in English from the earliest published works until 1990. He holds a BSocSci and Postgraduate Diploma in Library and Information Science from the University of Cape Town. In 2005 his compilation,The Poems of Dennis Brutus: A Checklist, 1945-2004 was published by Parallel Press, at the University of Wisconsin-Madison. His other publications include articles on NELM and its collection and topics related to his research.

“Selby Mvusi: a missing puzzle in the evolution of South Africa’s black modernism” 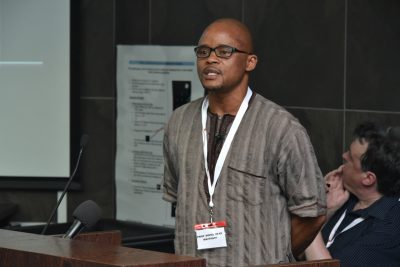 Sopelekae Maithufi is an Associate Professor in the Department of English Studies, University of South Africa, Pretoria. He has published articles on the resonances of the ‘ordinary’ in the South African short story and on post-exile South African black fiction. He currently researches the representations of black African healing rituals in different artistic media.’

“The Influence and Struggles of Writers Organisations in Developing, Preserving and Promoting Indigenous Languages Writing”

Samuel Mazungwe Mtsweni has majored in isiZulu in his first Junior Degree with UNISA in 1995 as well as Senior Degree with the University of Pretoria in 1996. His modules included literature studies as well as literature development for learners. In 2002, he obtained a Senior B Tech Degree in Education Management with the then Pretoria Technikon presently known as the University of Technology (TUT). In 2010, Mtsweni obtained a Senior Degree in isiNdebele Linguistics Translation-and Interpreting with UNISA.

“Establishing/Reviving a Sustainable South African Writers Organisation, Where do we start?” 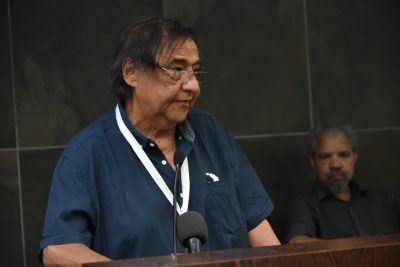 Colin Jiggs Smuts is from Johannesburg. He was executive director of The Open School which was a cultural education programme and which many members of the SSRC of 76 attended. He also ran the Community Based Development Programme, CBDP which was a organisational development organisation that worked with com-munity organisations in the townships. He is an author and cultural activist and was secretary of the Writers Forum, Treasurer of the Congress of South African Writers and Secretary of the UDF Cultural Desk. 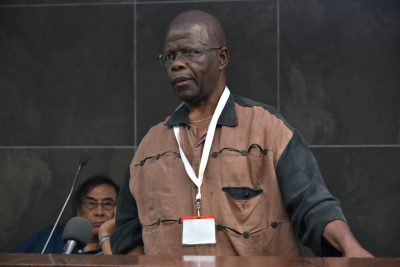 Walter K. Chakela is a playwright, poet, director, and arts administrator. He was the artistic director of the Windybrow Centre for the Arts since and from 1990 to 1992 he was artistic director of the Bophuthatswana Arts Council. A member of the Congress of South African Writers (of which he served as president for three years), Chakela has written more than 25 plays for theater and several television and radio programs, as well as books on theater and children’s literature. In addition to directing his own work, he often directs plays by William Shakespeare and contemporary playwrights, and he has toured in Africa, Europe, and the United States. He is currently the managing Executive Director of Chaks Media. 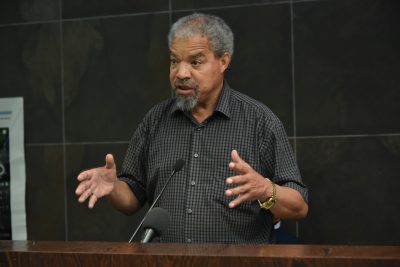 Porf. Andries Walter Oliphant is a literary scholar and cultural policy advisor. He chaired the Ministerial Arts and Culture Task Team and co-wrote the White Paper on Arts, Culture and Heritage. He chaired the Arts Culture Trust from 1995 to 2007.He is co-editor of the Journal of Literary Studies and Deputy Editor of the English Academy Review. He serves on the editorial boards of Alternation: Interdisciplinary Journal of the Arts and Humanities in Southern Africa, Scrutiny 2: Issues English Studies in Southern Africa and De Arte. He is Founding Editor of Baobab: South African Journal of New Writing.His writings on South African literature, art and photography are published locally and internationally. He is the recipient of the Thomas Pringle Award for Short Stories and the Book Journalist of the Year Award.He was Special International Guest of the Nobel Prize Awards held in Stockholm in 1998 and a participant in the First White House Seminar on Culture and Diplomacy hosted by President Bill Clinton in 2000. He chairs the Council of Ditsong: Museums of South Africa and serves on the Council of the National English Literary Museum.He heads the Division Theory of Literature at the University of South Africa. He is a Research Fellow at the Mapungubwe Institute for Strategic Reflection, commissioned by the Department of Arts and Culture to draft a National Strategy on Social Cohesion and Nation Building.